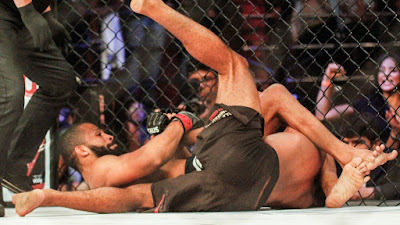 Malfacine made a super-successful MMA debut fighting at 125lb, beating fellow 0-0 fighter Romario Garcia by armbar only 1:34 into the first round. A fast start saw the nine-time world champion Malfacine take top position after a takedown. Garcia reversed from bottom mount, but Malfacine locked up an arm from closed guard to get the tap.

Vieira had a tougher test in what was his second career MMA fight, going almost the full three five-minute rounds against Fagner Rakchal before winning via arm-triangle choke with only 13 seconds left in the fight. Rakchal tested Vieira's stand-up defense and defended many of his takedowns. Vieira attacked for many submissions including a close armbar, but the finishing sequence was a classic MMA strategy: Vieira hit a single leg, threw some shots from top position, and isolated the arm for the choke to move to 2-0 following the win.